What is a good player?
What does it mean to be a good football player? This is the main question that scouts ask. But before we can answer that, we have to figure out what "good" actually means.
The problem of subjective opinion
Most people cannot agree on what makes a good football player. Some scouts think that a good football player is someone who is fast, while others think that a good player has great technical skills. Although we can verify such observations and opinions with objective stats, big data actually does not help to define what "good" means.
What is Goalimpact?
We use the most objective definition of what a good player is: A good player helps the team to score more and concede less goals when he is playing. Thus our Goalimpact algorithm measures how much a player contributes to the goal difference of his team. If a player has a high Goalimpact number, then it means that the team has a good goal difference with this player on the pitch. 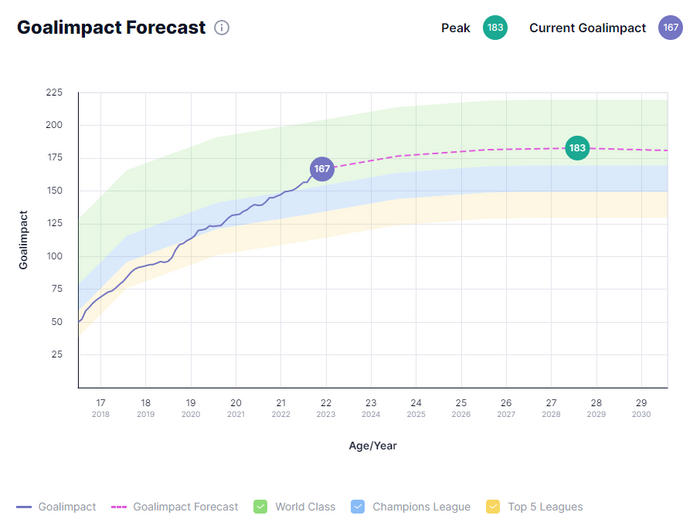 The Goalimpact algorithm measures how much a player contributes to the goal difference of his team. If a player has a high Goalimpact number, then the team has a good goal difference with this player on the pitch. Therefore Goalimpact rating is a relative index which allows comparison between players. This number is adjusted by teammate’s ratings and the opposition strength, minutes played, home advantage, fatigue degree, age and red cards in a game.

Based on the large database Goalimpact can also estimate the future development of a player and thus forecast his peak performance. Clubs thereby can detect young promising talents early on. The best players in the World have a Goalimpact higher than 170. Top 5 League Players have a Goalimpact of approximately 150.